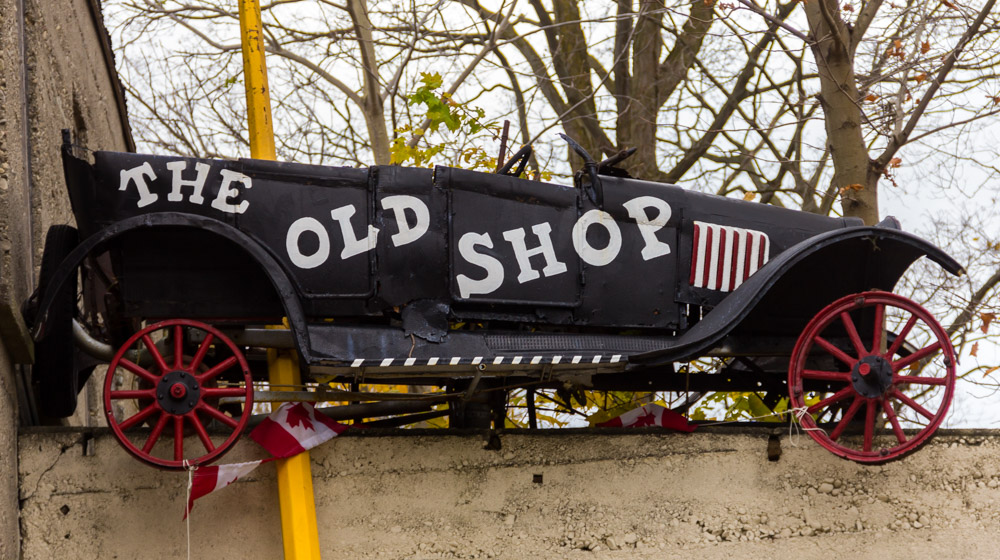 In the early 1970’s a local fellow pulled an old Model T ( in very rough condition) out from the bush and brought it to a flea market in Brussels, Ontario. At the time, this was a very large, 3 day market, bringing hundreds of cars into town. At the end of the event, leftovers would go to the garbage or scrap. When the Model T fell into that category, a friend and I went partners for $20. each to own it. 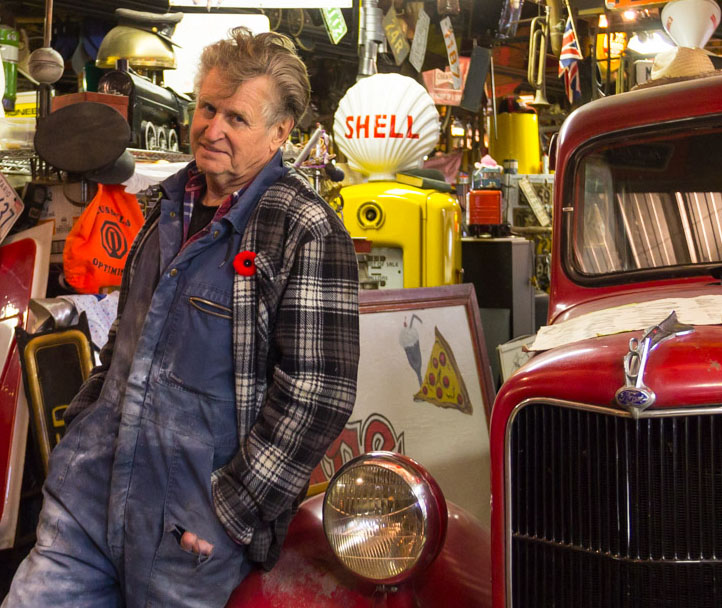 A year later, I saved up another $20. and bought out my partner. I worked with parts I had, fenders, hood, wheels, steering to put this beauty back into shape. Then I had another bright idea; to put the relic in a Brussels Santa Claus parade.
At the Wingham garage, I advertised my auto body restoration shop, by pulling this Model T, with an old 1928 Model A, that I have run for 55 years!
So the old T became my shop landmark and sign – pushing it in and out each night. But after awhile; and with my faithful friends, we started an uprising, by digging a huge hole, putting the post in first, fitted the frame on the Model T with a sign, support and lights. Now we just needed cement to hold the base. Called a ready-mix, whom I had done work for in the past, and they always had a little cement left over for a cheap project as this was, and knowing that their old timers there would oblige a favour. Unbeknownst to me, the neighbour across the street had ordered a special heated cement load, for setting egg shipments on, in his orchard. So, along came Maitland ready mix, slowing down, looking back at the shop, and looking a bit lost. So I go wave the driver over; and when he asked where do you want the load – I pointed at the hole. A few old bricks and stones were thrown in also; the pole was set. I paid the bill and he was off. Over to the orchard he went – I guess for apples, but when the neighbour asked “ where’s my cement? “ the driver said – “ over there in the hole “. Oh no, wrong place!!. The driver was off to reload a special mix, and still deliver that same day. So, my so-called “ free cement “, wasn’t so free in the end. With many friends and a lumber truck lift, my Model T was now up a pole, making a great sign, and the largest bird’s nest in town. Robins, sparrows and blackbirds nested and all got along.
This Model T became a very recognized landmark; with lots of tourists’ snapping pictures, car rally’s having contest questions about what size the tires were etc. At Christmas time we had 5 employees get up into the car with Santa Claus for photos on our business Christmas cards. At Hallowe’en, it was filled with pumpkins. Just part of the family, you could say.
38 years later, changes happen, and time for it to come down. The apple farmer came with his tractor and bucket to remove the old Model T. Within an hour, down she came, and back home to Brussels. May 2016, and another uprising. 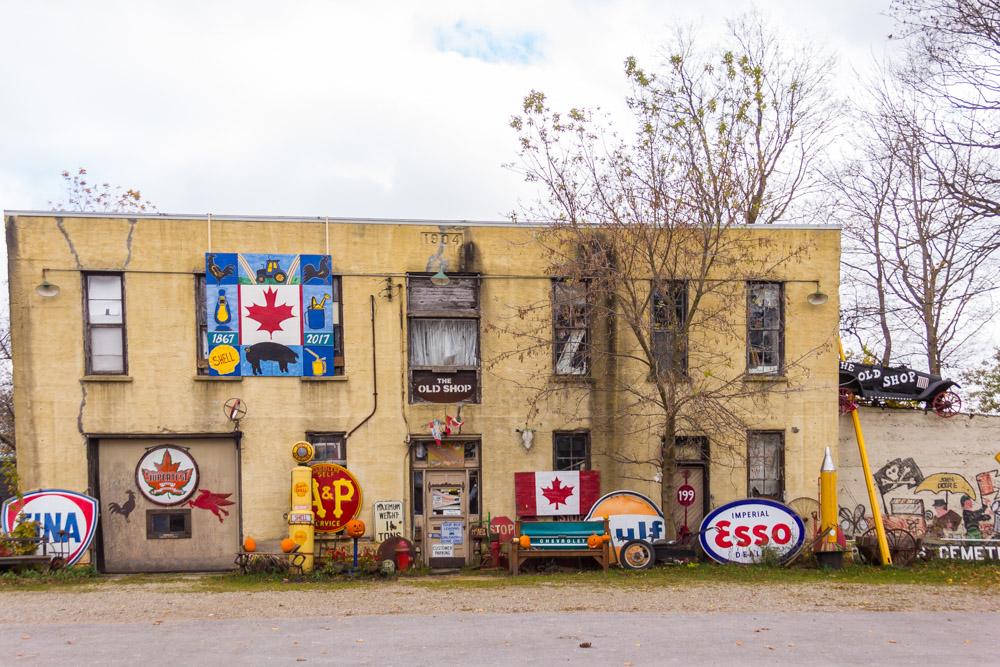 This time right here at the Turnberry Street North, with many thanks to all the helpers to lift this eyesore again. Needing cement again, my thanks goes out to Kramer Cement, right in my own backyard, and to the boom truck, with Jason Guluzen.
Have been here for 70 yrs now, with all my awesome collection of paraphernalia and old stuff, I don’t think that Model T will be moving again – at least not without me!

submitted by Don McNeil of Brussels, Ontario featured in The Garage Door News, a publication of the Canadian Service Station Memorabilia Association.

Mr. McNeil’s OLD SHOP, open by appointment or by chance >>

Wellington North is a community with passionate and skilled people...
Business

Turning Pain Into Something Beautiful

Creations by Susan—Unlike Any Other Art Or Gift Shop In…

Creations by Susan—Unlike Any Other Art Or Gift Shop In...

Schmidtsville family restaurant and gift shop is located in the friendly town of Wellesley, Ontario

During These Difficult Times!

Important message from the RuralBuzz Team. We are here for you before, during and following these difficult times. We are…

A Land Mark Sign submitted by Don McNeil of Brussels, Ontario   In the early 1970’s a local fellow pulled…

Drive to Dave’s We’ve all heard of famous Hollywood inspired haunts such as Cheers, Luke’s Diner from Gilmore Girls and…